Cola Wars Sparking "The beginning of the end of petroleum-based plastics": " 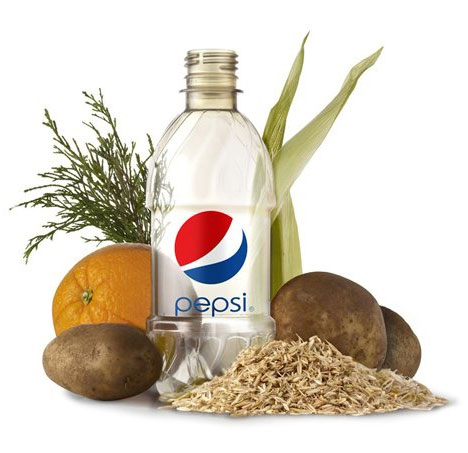 PepsiCo now has a green bullet they can fire at archrival Coca-Cola. Yesterday the former revealed that they have a new, petroleum-products-free bottle design comprised entirely of vegetable products including switch grass, pine bark and corn husks. Despite its more natural provenance, the new bottle is 'indistinguishable' from the current plastic one, according to PepsiCo's Senior Veep of Advance Research Rocco Papalia. 'We've cracked the code,' he said.

PepsiCo announced the discovery Tuesday and said it plans to test the product in 2012 in a few hundred thousand bottles. Once the company is sure it can successfully produce the bottle at that scale, it will begin converting all its products over.

That could mean a switch of billions of bottles sold each year. Of Pepsi's 19 biggest brands, those that generate more than $1 billion in revenue, 11 are beverage brands that use PET.

Scientists said the technology is important innovation in packaging.

'This is the beginning of the end of petroleum-based plastics,' said Allen Hershkowitz, a senior scientist with the Natural Resources Defense Council and director of its waste management project. 'When you have a company of this size making a commitment to a plant-based plastic, the market is going to respond.'

Coca-Cola is working on a similar bottle, but they're reportedly several years behind.