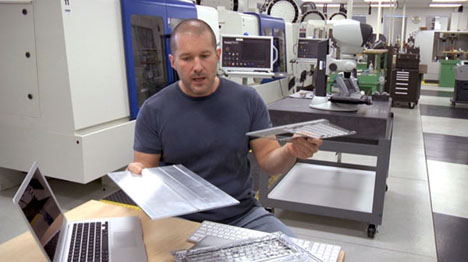 It's a shame Jonathan Ive doesn't grant more interviews, but it's easy to see why: There exists a YouTube clip of Ive being interviewed by a British tabloid-style TV show some years ago, and rather than being given an opportunity to engage in a potentially-edifying discussion about design, the cloddish host ambushes him with questions about a media-manufactured controversy over iPod battery issues. And in more recent years, sensationalit articles speculating on Ive's salary or discussing his choice of car have cropped up.

We here at Core77 don't care what kind of car Ive drives, how much money he makes or what his workout regimen is. We're not interested in Ive's celebrity. We'd be thrilled to see a Jonathan Ive interivew where he talks about aluminum or co-molding for 30 minutes. We're interested in his design talents and philosophies, his knowledge of materials, and what those things can inspire and impart to the upcoming generation of designers. So we were excited to see Shane Richmond, The Telegraph's Head of Technology, intercept Ive on the occasion of his being Knighted and interview him in an engaging discussion about design, released just this morning.

We think of Jonathan Ive as a successful designer because we have seen his successes, but it's not productive to merely drool over his on-the-market creations. To understand his design thinking and how those successes are achieved is much more edifying. It's fascinating, for instance, to think about how many iterations of the iDevices Ive and the design team slaved over that would never make the cut:

"For a large percentage of a program, it often is not clear whether we are actually going to be able to solve the problems. For a significant percentage of the time we don't know whether we are going to have to give up on an idea or not. And that's been the case whether it's the iPod, the iPhone or the iPad."

And there have been times when we've been working on a program and when we are at a very mature stage and we do have solutions and you have that sinking feeling because you're trying to articulate the values to yourself and to others just a little bit too loudly. And you have that sinking feeling that the fact that you are having to articulate the value and persuade other people is probably indicative of the fact that actually it's not good enough. On a number of occasions we've actually all been honest with ourselves and said 'you know, this isn't good enough, we need to stop'. And that's very difficult.

Those are the kinds of design lessons we'd like to read more about, and luckily, this morning we can. Check out the two-page interview here.
(more...)