SkyLifter hopes to build a better blimp by going round

SkyLifter hopes to build a better blimp by going round: " 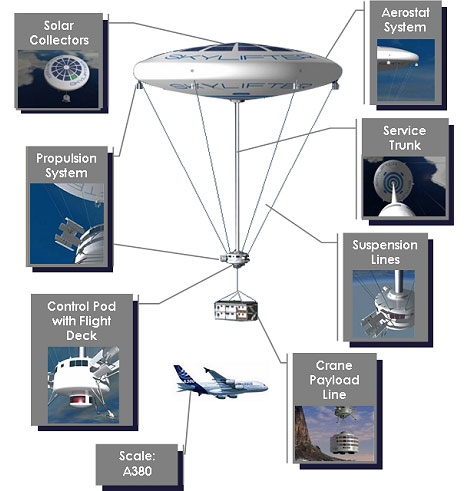 Most dirigibles are roughly cylindrical, which makes them susceptible to crosswinds. This can make it tricky to, say, lower a heavy load with precision when the wind is not cooperating.

An Australian company called SkyLifter has realized a circular shape would be a better design decision; the wind hits it and goes around it like water flowing around a smooth pebble in a stream. Thus they're developing an eponymous and gi-normous circular blimp that will reportedly be able to haul 150 tons over a distance of 2,000 kilometers without having to set down. That means the SkyLifter could conceivably transport a miniature hospital to a disaster site inaccessible by roads, among other heavy stuff. These things could put the Ice Road Truckers out of business.

Another cool design feature, beyond the circular shape, is the novel Voith-Schneider propellers they use to provide thrust and steering. They're closer in design to paddlewheels than standard fan-style propellors and can change the direction of thrust almost instantly. You can briefly see what they look like in this vid:

SkyLifter is currently in the testing phase, starting with scaled-down versions of the design and gradually ramping up the size.